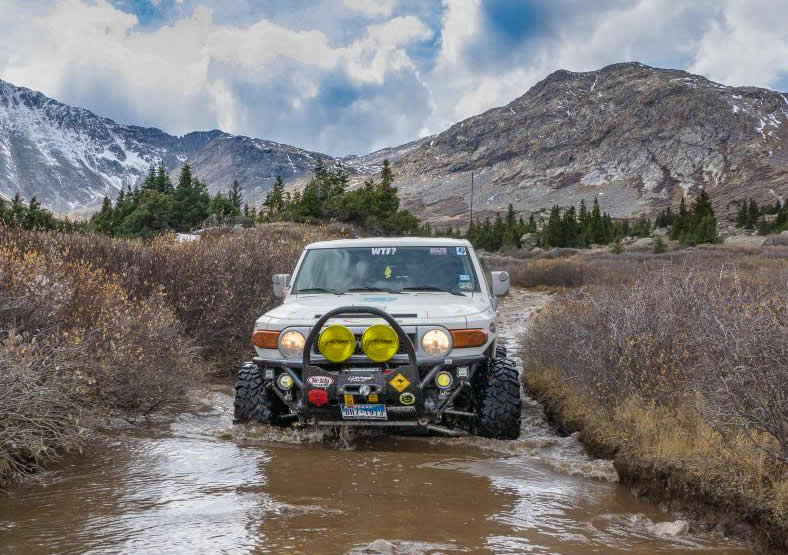 So while searching for the replacement to the Tundra I knew I had to have something that I was going to enjoy for a long time, after all I've had the Tundra for 4 years and I still like it a lot. The only reason it is getting replaced is that I don't want to destroy it as it has a lot of sentimental value. I spent most of the summer considering this question and looking around on eBay trying to find something that held the same sort of excitement that the Tundra has, would allow me to customize it and would be something other than the typical Jeep and Toyota Hilux bodies that are so common.

What I found was a Nikko Toyota FJ Cruiser body. The FJ Cruiser was one of the many vehicles that have been created from the late 90's through to today where car manufacturers try to recreate and re-imagine old models that have long been retired. There are many of these vehicles now such as the Camaro, Charger and Mini Cooper among others. The Nikko body is hard plastic like I wanted and is a bit shorter than the Tundra so I will just need to shorten my links slightly. It won't be as short as Project Shorty though so it shouldn't require the same level of major modifications. The FJ Cruiser body comes with working headlights and the taillights and other lights can be modified to have working lights as well. 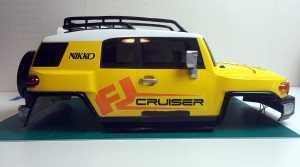 Size wise, the FJ Cruiser body is very similar to the Land Rover D90 body. It is a bit shorter in height and a tiny bit shorter in wheelbase, but not by much as you can see. 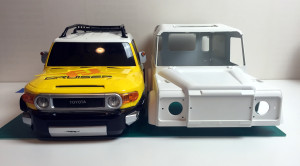 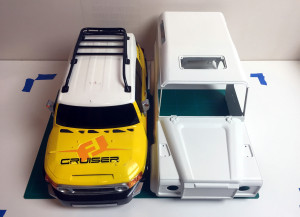 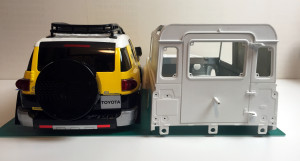 There are some areas of the body that need to be repaired. For example the hood has two cracks in it from where the stock body posts have been pushed on too hard. There are lots of scratches as it was a toy grade RC body and I really don't care for the yellow anyway so the entire body will be repainted.

My plans for the FJ Cruiser so far include:

The inspiration for these plans comes from one particular 1:1 vehicle that I found on a forum. The FJ Cruiser that I found has been modified extensively, almost to the point of not being able to be driven on the road daily. My plan is to basically make a scale replica of this vehicle. As the 1:1 has gone through several evolutions I may pick and choose the features that I like the most to keep the overall feel and make it my own however it should have this kind of look to it when I am finished. 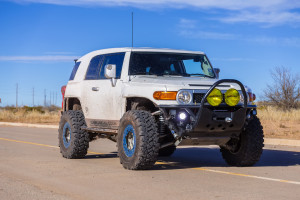 My goal is to have all this finished by Aeroseum in the Spring of 2016 so it's going to be a busy winter.

* Credits to Gnarly Tree Photography for the opening image.

* Credits to Captures by Colin for the closing image.