Shock keys, shock relocation and damper adjusters are all names of basically the same thing. They are a device to allow you to relocate the upper (usually) end of your shock. For scale crawlers such as the Axial SCX10, RC4WD TF2 and Gelande 2, GMade Sawback, GMade Komodo and Vaterra Ascender the shock location is basically vertical and only allows for a few degrees of adjustment at the top mounting point. This design is based on a scale appearance as most 1:1 street driven trucks have vertical shock mounting setups.

However, if you look at the competition style crawlers like the Axial AX10 Deadbolt or GMade R1 you will see that from a side view their shocks are angled inwards at the top mounting points forming something like an upside down V. This gives the axles more articulation. Articulation is also known as vertical wheel travel, meaning how far can the wheel move up and down in relation to the chassis. On a solid axle vehicle this also translates into how extreme of an angle the axle can be moved to while travelling over rough terrain and still maintaining ground contact with all of the tires.

So what do we do? We know that the competition style buggies with their angled shocks have more articulation and can crawl over much more difficult obstacles with greater ease than a scale crawler. We could obviously just put a body on a competition crawler style chassis like the Axial AX10 Deadbolt but that totally avoids the scale crawler approach that we were trying to achieve in the first place. In addition, if you are into scale competitions, the rules don't allow for that in some of the classes. We could make up some sort of custom bracketry to move the top shock mounting points inward to the same slanted angle like the competition crawlers but again that would take away from the scale crawler appearance. Luckily there is a compromise that also brings in some other advantages.

The compromise has many names such as shock keys, shock relocation and damper adjusters among others but they all essentially amount to a small bracket that can be mounted to your chassis in the stock upper shock mount location and then you can mount your shock top to another spot on the bracket. These brackets have a variety of shapes from looking like a key to your house to circles, ovals and many other custom shapes. The one drawback to a relocation bracket versus a custom bracket that replicates a buggy is that it doesn't allow for quite the same extreme shock angles like on a competition crawler. It does however keep a more scale appearance and has one other major benefit. Most of the relocation brackets have more than one hole to move your upper shock mount to. Most of them have several holes and in addition are also able to be mounted at many different angles. This allows you to further fine tune your setup to your particular driving style as well as to the terrain. Having multiple holes allows you to change your setup out on the trail by simply removing the shock bolt and/or bracket bolts and putting the bracket and/or shock into a different mounting location to achieve the desired angle. In addition to shock angle you can also adjust your vehicles ride height up or down with these brackets. 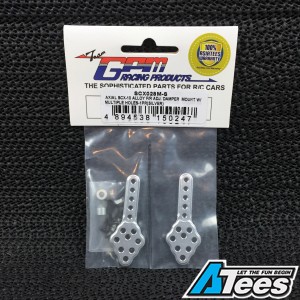 I recently picked up these "GPM SCX10 Alloy Damper Mount with multiple holes" brackets from AsiaTees. You can see that they have many different ways that they can be mounted by simply choosing which two holes to use to mount them to the SCX10 shock mount and then mounting the shock on to another hole. 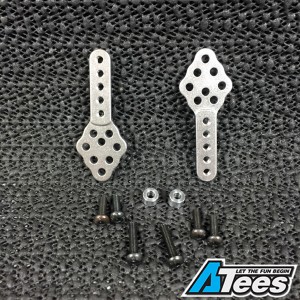 Each package comes with 2 brackets, 4 screws to mount the brackets to your SCX10 and 2 screws with spacers to mount your shocks to the bracket. 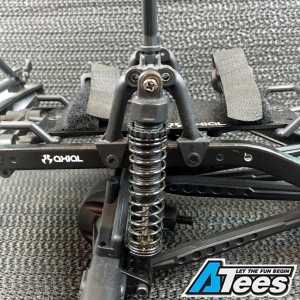 Here is the stock shock angle of the rear of an SCX10 with the shock mounted using the center hole. 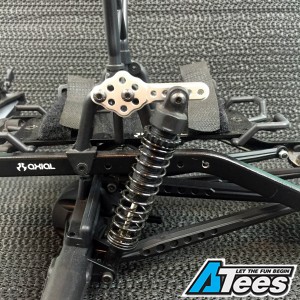 In many situations you don't actually want a ton of articulation as it can cause problems by causing axle walk or axle steer which is a term meaning that the axle starts to cause the vehicle to turn because of the angle that the axle has moved to. Most setups allow for a lot of articulation but then limit it in various ways either through shock size and tuning or with limiting straps to prevent axle steering.

Keep in mind that shock angle isn't the only factor to determining the articulation, the shocks you are using play a very large role in this and to go to the further reaches of the brackets you may need longer shocks. However, in the end it's all up to you to experiment and see what you like and what works best for you and the places you drive. however a shock relocation bracket will give you lots of choices that can be made quickly and easily for very few dollars.