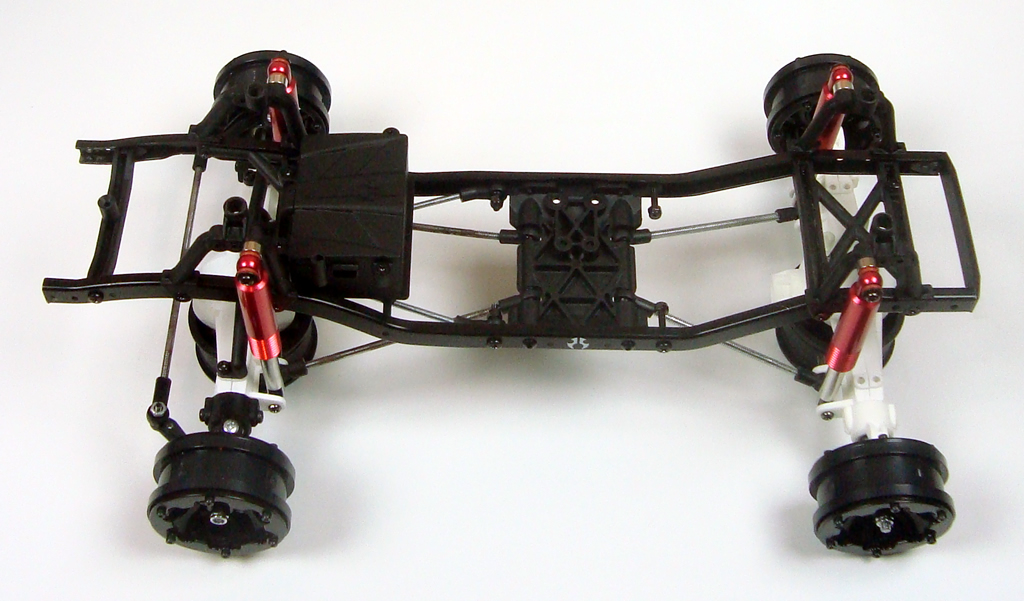 So you might know if you've watched the Project Expedition videos this far, I purchased two Axial SCX-10 frame sets to be able to create an extended frame for Project Expedition. I removed 6cm from the back straight portions of one of the SCX-10 frames and grafted them into the middle of the other frame. This left me with one set of rather short frame rails. I've been contemplating what to do with them for a while now.

Yesterday I came across a series of photos that gave me just the inspiration that I needed. Both photos were of the same model 1:1 body, but one was a dedicated rock crawler and one was a street cruiser. Then inspiration hit! I realized that this particular model of car was also available in a Tamiya hard shell body and that it was rather short compared to most 1:10 bodies. I thought I could probably move the shock towers on the remaining frame rails to be just short enough to fit the body. For the theme I would take the look of the street cruiser and apply it to the crawler version for something unique. I have dubbed this build "Project Shorty" as it will be the shortest 1:10 crawler I have built so far.

I did some checking online and found that the Tamiya hardshell of this 1:1 body had a wheelbase of 24cm, length of 33.7cm, width of 18.5cm and a height of 12.5cm. I first moved the front shocks to the rear-most hole. Next I slid the rear inside x-brace as far forward as it would go and drilled 4 new holes in the chassis rails and re-mounted the rear shock towers using the forward-most hole. This gave a wheelbase of 25cm. That's 1cm too long and I can come up with custom shock tower mounts if I need to but the body style has rather open wheel arches so we'll see when the body, wheels and tires arrive if it is still too long or not.

For the time being I have thrown together some spare parts I had laying around to mock up the chassis. The axles are 3d printed pieces that are way too thin to ever use on the trail and don't even have any inner detail to support the gears and shafts but work great for mockup purposes. The links are made up with 3mm threaded rod cut to length to get the desired wheelbase and the shocks are temporary ones from a Tamiya F-350. The wheels are also mockup pieces that are Chinese copies of the stock Axial Honcho wheels which I mentioned in a previous post about powder coating rc parts. It's currently missing the rear upper links as I don't have a Y brace to make a 3 link or another axle brace for the 4 link setup.

Either way this will be a rather short wheelbase vehicle and should be quite fun to drive! 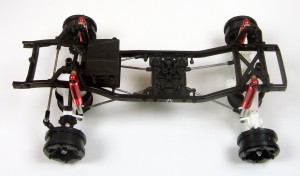