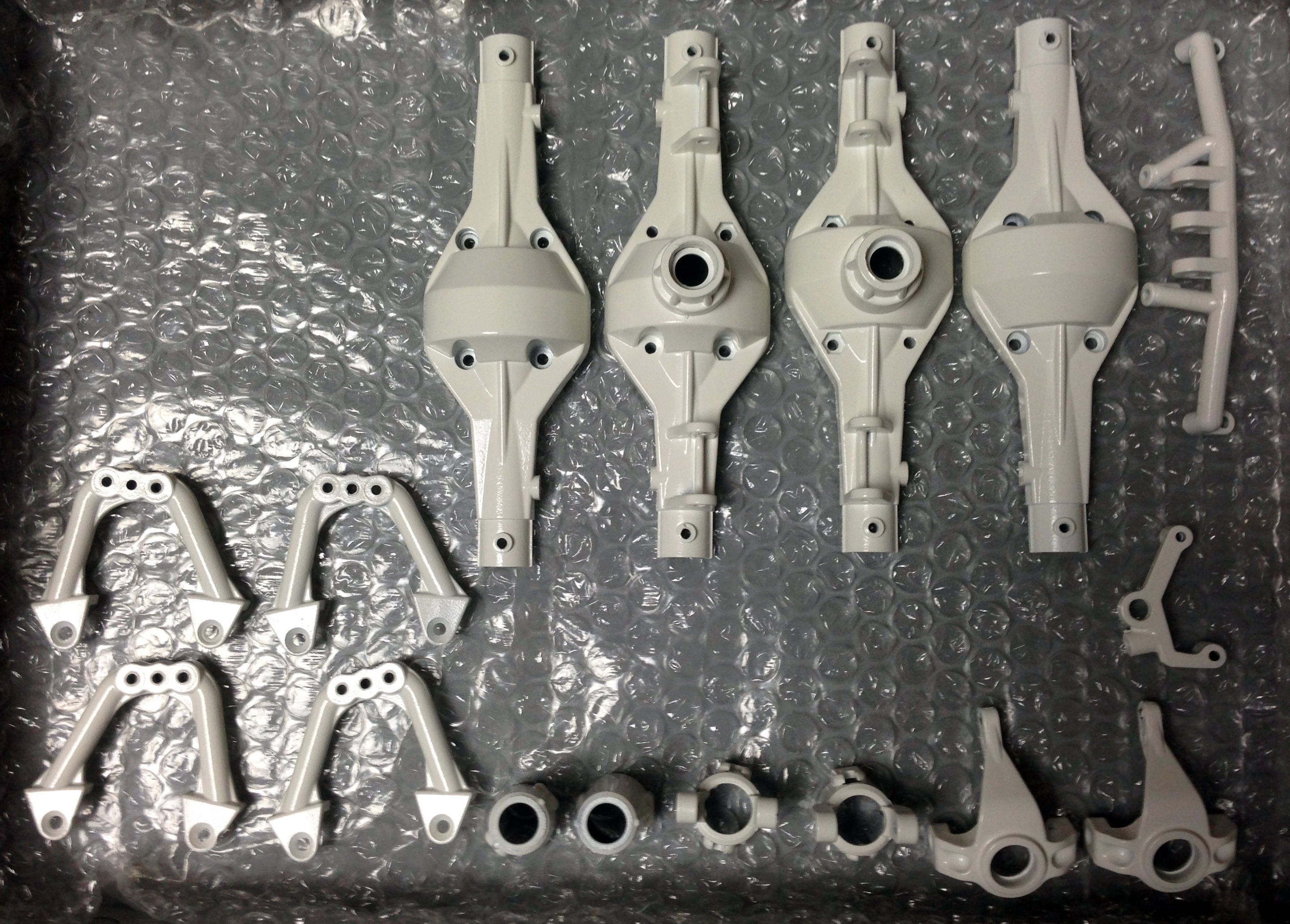 The look of Project Shorty was created by combining the look of two different full size vehicles which have the same make and model body. One was built as a rock crawler and the other as a slammed down boulevard cruiser. The main look will be that of the boulevard cruiser so I wanted to do as much as possible to make the entire thing look and feel like that even though it will be a rock crawler.

The way that I have achieved this is to take the approach that custom, show quality, hod rods use. Nearly everything will be painted or powdercoated, even things that will eventually get scratched up. Scratches will mostly be on the bottom facing sides so from above or the side they won't be very noticeable and the big scratches can always be touched up later. This will give it that clean, crisp look of a custom hot rod / boulevard cruiser even though it is sitting up off the ground on big offroad tires. To that end anything on the chassis that is metal will get powdercoated and the plastic pieces will get painted.

There was one minor issue however. The issue was simply trying to find a matching paint and powdercoat color. As some of the Axial chassis parts are plastic and some are metal and I wanted them to be the same color there were issues with getting the exact right color powdercoat to match the chosen paint color. After 3-4 tests we found the right color and I sent off all the metal parts to be powdercoated while I set about painting the remaining plastic pieces. The plastic parts there were the axle housings, knuckles, steering arms and lockouts, all of the chassis braces and shock hoops as well as the rock rail mounts. These were all prepared by giving them a thorough cleaning with degreasing agents, let to fully dry for 24 hours and then scuffed lightly to give the base primer something to bond to and primered with a plastic primer. They were painted with Multona 0016 White and then clear coated with many coats to protect them as much as possible. Multona paints are an automotive paint so care has to be taken with ventillation and proper coverage for your skin, eyes and nose/mouth. Automotive quality paints also require a special type of drying/curing time. While the paint may be dry, it may not actually harden for much longer. The best approach is to do many thin coats as always but then after you have good coverage, let it cure for at least 24 hours to make sure that the paint has had time to harden. Here are most of the plastic parts all finished. 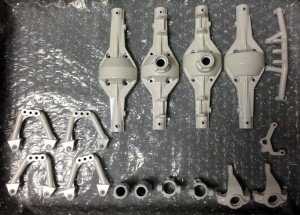 For metal parts there were the chassis rails, the suspension and steering links and the beadlock rings for the wheels. These were all powdercoated in RAL 9001 (Cream) Gloss 72 which is about as close of a match to the Multona 0016 as you could possibly hope for I think. Powdercoating parts has been described in one of my previous posts but it essentially requires some special equipment as it involves using electricity to attract paint powder to the parts and then baking them in an oven to cure the parts. Here are the metal parts ready to head off to the powdercoater for the white color. 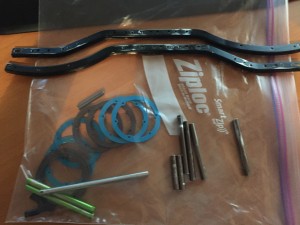 The bumper for Project Shorty also had to be customized. For this somewhat unique body, at least on a crawler, it had to have something that was slightly different from the usual. While not unique in any way, I went with the RC4WD Tough Armor Metal front bumper with winch mount and grill guard. The bumper had a low enough profile so as to not obstruct the front of the vehicle too much, was the right width and fit the overall theme rather well. The only problem was that it was black. So it too went off to the powdercoater for a coat of RAL 9007 (Grey Aluminum) Gloss 72 which isn't quite a chrome look, but it is close. 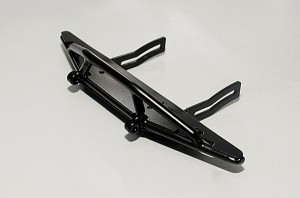 I'd like to apologize for the quality of some of the photos from here on out. Because Project Shorty is a gift and we are finally at the point where it has started to take on the colors and shapes of its final form, much of the work has had to be done late at night or in very short periods of time to keep it hidden. So that meant a lot of the photos were done quickly by taking the parts out, getting a quick photo and then the parts quickly hidden again so the surprise wasn't ruined. Here are the parts back from powdercoating. You can see both the white and silver parts that were done. The bumper has been disassembled into its pieces to make sure that all areas were covered. 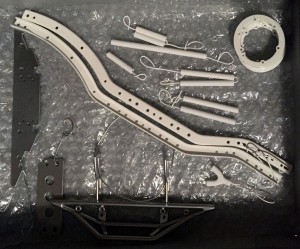 In the next post we'll begin putting all of this together and finally get a chance to see what Project Shorty looks like as a rolling chassis!