When I introduced Project Shorty it began with two shortened SCX-10 chassis rails and a collection of spare parts. The next step was to determine what body might fit on such a short chassis. I also have stated that it was a combination of the styles of two different full size vehicles, merged on to the shortened SCX-10 chassis.

I found this photo of Bhathiya Welaratne's VW Beetle by Sebastian Voll on StanceNation.com and it was what kickstarted the idea for the color theme and general hot-rod style level of detail with a painted and powdercoated rolling chassis.

A few hours later I found this photo on Jason Handley's Photobucket of a VW Beetle that had been turned into a rock crawler. 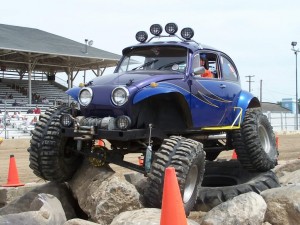 The two kind of immediately "clicked" in my head as a potential candidate for the shortened chassis and and I started looking around at the various RC Beetle bodies that were available. I remembered that Tamiya made a Beetle in an ABS "Hard body" so I went to check the specs. It has a wheelbase of 24cm, length of 33.7cm, width of 18.5cm and a height of 12.5cm and included a bunch of details. 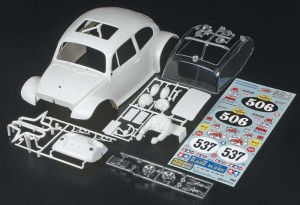 As I mentioned in part 1 and part 3, the rear suspension mounts had to be moved forward to fit this body but I think it is well worth it. There is a lot of custom work that has to be done to the body to bring it up to my requirements however. There are huge moulding lines from the forming process and there are 3 holes for the body mount and antenna that will have to be filled as they won't be used. Tamiya also made the "nose cone" a separate piece that slides into a slot and locks into place. That will have to be sanded and blended with putty. In addition, Tamiya doesn't include a rear window for the Scorcher bodyset so one will have to be fabricated out of clear sheet styrene. Finally there will be one minor and one major modification to the bodyset based on the car that inspired the overall theme.

That's it for this time, more to come next time with some pictures of the body on the chassis!